Encouraged by my 10 year old to cut down on plastics and re-use as much as possible, we started an experiment for growing some vegetable seeds – we’re starting off with beans, peas & gerkins.

For my birthday,  my sister had bought me a paper pot making tool, so we decided to try this out and also use some kitchen roll and toilet roll tubes to see what worked the best for growing vegetable seeds.

With the cardboard tubes, it was trial and error but the best way was to make cuts from the bottom of the tube up to about a 1/3 of cardboard.  This was done about every 2cm then folded the flaps over each other so it had a closed base. 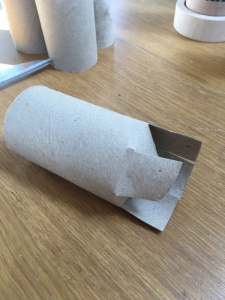 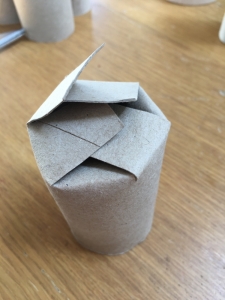 For the paper pot maker, strips of newspaper were cut and rolled around the pot maker.  The newspaper was then folded at the base.  The instructions with the pot maker said to press the newspapers into the base supplied and twist, but every time I twisted it ripped the paper, so in the end I just pressed it in and it seemed to do the job and create a closed base. 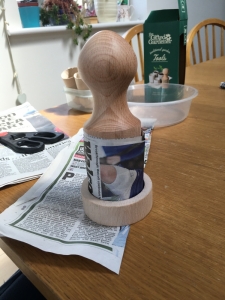 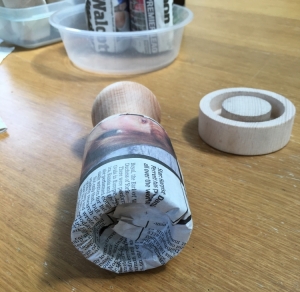 To stop the pots falling over and to give them some stability, we used a plastic container from a take away and put the paper pots in this.  We filled each pot with compost and planted our seeds…and waited… 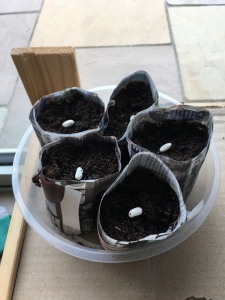 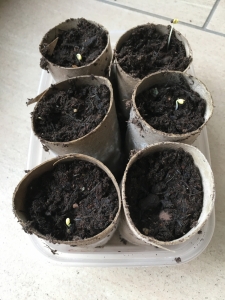 My daughter and I both thought the newspaper pots would disintegrate first and be a bit more flimsy but actually we think they are the best.  The cardboard tubes are definitely stronger but they have started to go mouldy on the outside.  we also reckon they will take longer to break down in the soil once we plant them.  However, the seeds have come through in both sets of pots and 2 weeks later are outside in a cold frame (having been in the kitchen to germinate for the past few weeks). 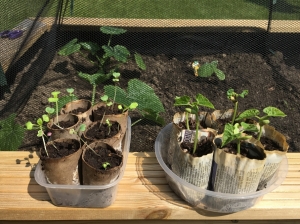 Our verdict is either are great but we enjoyed making the paper pots.  You don’t really need a tool to make them (although pressing them at the base was useful).  If you have a gardener in the family they do make a good gift though.  There’s something really positive about growing from seed – every morning my youngest checks for the seeds coming through and waters them.  Two  weeks on we’re doing some successional sowing so have done it all again so we’d definitely recommend.  It’s also great that everything we have used has been recycled or re-used so we haven’t used any plastic pots.  Definitely recommended and maybe a good half term activity to do with the kids too.

This site uses cookies. By continuing to browse the site, you are agreeing to our use of cookies.

We may request cookies to be set on your device. We use cookies to let us know when you visit our websites, how you interact with us, to enrich your user experience, and to customize your relationship with our website.

Click on the different category headings to find out more. You can also change some of your preferences. Note that blocking some types of cookies may impact your experience on our websites and the services we are able to offer.

These cookies are strictly necessary to provide you with services available through our website and to use some of its features.

Because these cookies are strictly necessary to deliver the website, refusing them will have impact how our site functions. You always can block or delete cookies by changing your browser settings and force blocking all cookies on this website. But this will always prompt you to accept/refuse cookies when revisiting our site.

We fully respect if you want to refuse cookies but to avoid asking you again and again kindly allow us to store a cookie for that. You are free to opt out any time or opt in for other cookies to get a better experience. If you refuse cookies we will remove all set cookies in our domain.

We provide you with a list of stored cookies on your computer in our domain so you can check what we stored. Due to security reasons we are not able to show or modify cookies from other domains. You can check these in your browser security settings.

These cookies collect information that is used either in aggregate form to help us understand how our website is being used or how effective our marketing campaigns are, or to help us customize our website and application for you in order to enhance your experience.

If you do not want that we track your visit to our site you can disable tracking in your browser here:

We also use different external services like Google Webfonts, Google Maps, and external Video providers. Since these providers may collect personal data like your IP address we allow you to block them here. Please be aware that this might heavily reduce the functionality and appearance of our site. Changes will take effect once you reload the page.

The following cookies are also needed - You can choose if you want to allow them: